ALICE Reports: A Snapshot of Hardship

ALICE (Asset Limited, Income Constrained, Employed) are hardworking members of the community who are employed, yet can’t keep up with the rising cost of living.

ALICE families earn above the Federal Poverty Level, yet struggle to cover basic needs, including: housing, child care, food, transportation, health care, and necessary technology. Traditional measures of poverty do not capture the magnitude of people who are struggling financially – and that’s where the ALICE Reports step in.

Because U.S. military veterans have served and sacrificed for this country, there is a national sense of responsibility to ensure that their basic needs are met. And overall, veterans have fared better economically than nonveterans. Yet not everyone has been included in that trend: In 2019, more than one-quarter of veterans — 29% — still struggled to make ends meet across Florida.

According to the outdated Federal Poverty Level (FPL), 6% of veterans in Florida lived in poverty in 2019. But United For ALICE data shows that another 23% — nearly four times as many — were also struggling, in households that earned above the FPL but less than what it costs to afford the basics. These households are ALICE: Asset Limited, Income Constrained, Employed.

Financial Hardship Among People with Disabilities

Longstanding discriminatory policies and practices that impact access to education, employment, health care, housing and other resources create barriers to financial stability for people with disabilities. This fact hits home for the more than 40 million people in the U.S. who have a cognitive, hearing, vision, or ambulatory disability, or one that makes self-care or independent living difficult.

According to the outdated Federal Poverty Level (FPL), 23.5% of people with disabilities in Miami-Dade County lived in poverty in 2019. Yet United For ALICE data shows that another 44% were also struggling, in households that earned above the FPL but less than what it costs to afford the basics. These households are ALICE: Asset Limited, Income Constrained, Employed.

Between families in poverty and those who are ALICE, more than half (nearly 68%) of all people with disabilities in the Miami-Dade County lived in a household with income below the ALICE Threshold, struggling to afford essentials in the communities where they lived.

The number of children growing up in financial hardship in the U.S. is drastically higher than is widely reported. The ALICE in Focus: Children’s report reveals that federal poverty data undercounts how many children are growing up amid insecurity. According to the outdated Federal Poverty Level, 19.6% of children in the U.S. lived in poverty in 2019. Yet United For ALICE data shows that another 43% — more than twice as many — were also growing up in hardship, in households that earned above the poverty level but less than what is costs to afford the basics. These households are ALICE: Asset Limited, Income Constrained, Employed.

The reality is that between families in poverty and those who are ALICE, nearly 63% of children in Miami-Dade County lived in households that couldn’t afford the basics in 2019. 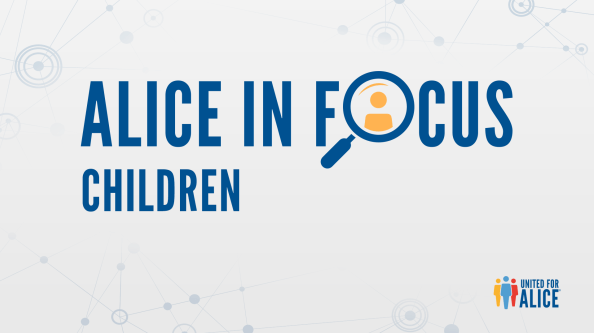 It’s easy to be blind to someone’s financial struggle. You grab a cup of coffee at the local café or bakery and don’t know the barista is a college student or single mom holding down two jobs to make ends meet. ALICE families are our neighbors, friends and family members.

The updated United Way ALICE Report is providing a holistic snapshot of financial insecurity at the state, county and municipal level. The population identified in the report as ALICE (Asset Limited, Income Constrained, Employed) are hardworking members of the community who are employed, yet can’t keep up with the rising cost of living.

The Miami-Dade ALICE population has decreased by 3 percent since the last report, which used 2016 data, while poverty dropped 2 percent. The Report shows that 37 percent of Miami-Dade Households are ALICE and an additional 17 percent are in poverty. Overall, nearly five out of 10 households continue to struggle in Miami-Dade.

What is United Way doing to help?

United Way’s approach to helping ALICE families is both short-term and long-term.  We recognize the only way to ensure that individuals are empowered to be successful in the future is to make sure they possess the skills and education to be financially resilient.

Short-term solutions to rising food and housing costs are important stopgaps to help families overcome these hurdles and United Way directly and through its investments in community programs provides this assistance. We also recognize that families need to be resilient in the face of economic challenges and that requires both long-term as well as more intensive interventions.

Education is key and quality early education is critical to future success. Services that address financial wellbeing through education, coaching and access to direct services, are also key to long-term financial stability. Some of United Way’s efforts to directly help ALICE families include:

When Working Isn’t Enough to Make It Work

What would you do? Make the tough choices.
Take the ALICE SIMULATION