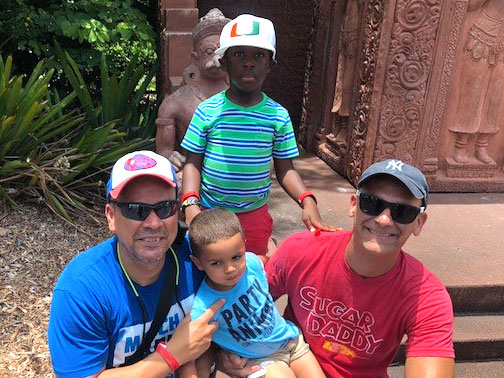 The sooner children get on a path to learning, the more successful they’ll become. That’s the lesson Jorge learned after he enrolled Malvin, his shy foster son, into our United Way Center for Excellence in Early Education (the Center).

“Our son had been placed in seven homes and in seven different daycare centers, before being placed with us,” said the father of two foster children. “It wasn’t going very well. Every time I would come in, there was an incident report,” he recalled. “I don’t think that they were equipped to handle a foster child.”

Malvin’s behavior problems began to improve after he was accepted to the Center. “One day he comes home and all of a sudden, he’s counting to 10,” recalled Jorge. “He hadn’t counted before, and you’re like, ‘oh my God!’”

At the Center, Jorge discovered that it takes a team approach for children to thrive — and the evidence is convincingly clear. High-quality early learning programs, which include well-qualified teachers, research-based curriculum and assessments and family engagement, are essential to nurturing young bodies and minds. “At the Center, everyone is on the same page,” said Jorge. “And they all communicate with each other – the teachers, the therapists, family engagement, the parents. It’s like a village.” And the improvements in his son have been encouraging.

“Number one, he’s more social,” observed Jorge. “He had a lot of fear of people in the beginning. And most importantly, he wants to do better. If he’s learning something at school, he’ll come home and want to practice it.”

Jorge believes that the early learning experiences that his son is now receiving are providing him with a foundation for later success.

”My son’s future looks bright,” he said. “In my generation, we waited until you were in kindergarten. But by starting him out early, he’s coming home, talking to us about birds and nature and numbers and letters.  And I’m just amazed that at that age he able to grasp all of that.”