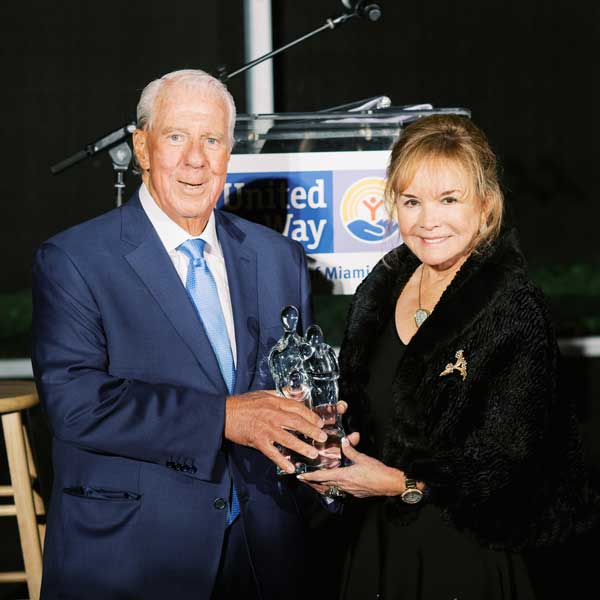 Swanee and Paul DiMare received the United Way of Miami-Dade Tocqueville Award for Outstanding Philanthropy in recognition of their advancement of Miami and extraordinary contributions to its residents. The couple was honored at the Tocqueville Grand Reception on January 22, where more than 200 of Miami’s most philanthropic leaders gathered at the reception to celebrate Swanee and Paul.

Their generosity has benefited countless organizations that empower residents and position Miami as a world-class city. At our United Way, Swanee and Paul are founding members of United Way Mission United and their multi-year gift was instrumental in launching and sustaining the program that empowers veterans and their families as they transition from active duty to civilian life. They have also served as VeritageMiami trustees, supported the Mayor’s Ball, and in 2015, became members of the Tocqueville Society.

“We applaud and celebrate Swanee and Paul whose leadership and philanthropy has helped propel our community to greater heights,” Maria C. Alonso, president and CEO, United Way of Miami-Dade, said. “Their generosity has benefited countless organizations across diverse fields that empower residents, position Miami as a world class city and affect positive change for generations to come.”

Swanee and Paul are longtime Miami residents with a passion for giving back to the community they love to call home. Their support for the arts, science and education has helped Miami forge ahead and provide new opportunities for its residents. Their belief that education builds a strong foundation inspired their commitment to the University of Miami, while their mission to shape young minds helped create the Paul and Swanee DiMare Science Village at Fairchild Tropical Botanic Garden, and their dedication to the arts led to The Swanee and Paul DiMare Stage at the Adrienne Arsht Center for the Performing Arts.

Originally from Massachusetts, Paul is one of the top fresh-market tomato growers in the nation, having been inducted into the Florida Agricultural Hall of Fame in 2005. He currently serves as president of seven family corporations and is the founder and administrator of the Paul J. DiMare Foundation. Paul has received countless local and national honors, including the Terry Vorhees Lifetime Achievement Award from the Southeast Produce Council, Martin Luther King, Jr. Award from the Homestead and Florida City Human Relations Board and Agriculturist of the Year by the Dade County Farm Bureau, among others. Nationally, Paul received the American Red Cross Humanitarian of the Year Award in 2007 and the coveted Ellis Island Award in 2014.

As an active volunteer, Paul has served as a board or trustee member of 1st National Bank of South Florida, American Red Cross of Greater Miami and The Keys, Baptist Health Foundation, Camillus House, Chapman Partnership, Phillip and Patricia Frost Museum of Science, Jackson Health Foundation, The Buoniconti Fund, University of Miami, and others. He is chairman of Florida Farmers and is involved with Farm Share, a nonprofit organization working to alleviate hunger by recovering and distributing fresh food to those who need it most.

A lifelong Miamian, Swanee is an active community volunteer and supporter, serving on the boards of the Adrienne Arsht Center for the Performing Arts Foundation, Fairchild Tropical Botanic Garden and Vizcaya Museum & Gardens. She previously served on the boards of the Miami City Ballet and the national board of Women of Tomorrow. Swanee is a founding lifetime member of the American Red Cross Tiffany Circle and Society of Women Leaders and the recipient of the One in Charity Award presented by the Archdiocese of Miami Archbishop’s Charity and Development Drive. She was appointed to the Florida Tourism Advisory Committee by Governor Jeb Bush, serving a full term of five years. Swanee received the American Red Cross Spectrum Award and was honored as a Woman of Distinction and Caring by the Plaza Health Network Foundation, among others.

Together, Swanee and Paul have been honored for their philanthropic work. The couple was named Miami Living Legends by Miami Today in 2013 and Centennial Humanitarians as part of the 100th Anniversary Celebration of the local American Red Cross. They were recently honored as Stars of Health and Wellness by South Florida PBS and received Honorary Bachelor of Arts and Letters Degrees by Miami Dade College.

The 800-member United Way Tocqueville Society contributed nearly $16 million to benefit more than 100 programs across 57 local agencies focused on education, financial stability and health. The society was named after a French historian who recognized, celebrated and immortalized the voluntary spirit he witnessed in America during the 1800s. Years later, United Way’s Tocqueville Society continues to honor those individuals who demonstrate an extraordinary sense of philanthropy with remarkably high levels of giving.