The first distribution rolled out in mid-October with the first 1,000 pounds delivered to the Ansin building where 50 families, many of them from the United Way Center for Excellence in Early Education, each picked up 20 pounds to feed a family four. Another 500 pounds were delivered to 25 families at A New World Academy I.

Goya Foods will make two additional deliveries, of 1,500 pounds each, to stock up the community cupboards at both locations during the months of November and December, when the holidays place an additional strain on families.

In 2011, United Way Center for Excellence in Early Education launched the community cupboard to help families who do not receive regular food assistance by providing them with nonperishable food items every month. A second community cupboard opened at a partnering Early Head Start Center in 2015, serving families in Liberty City. 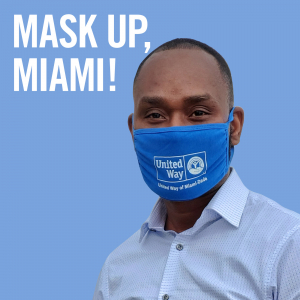 Get your mask here